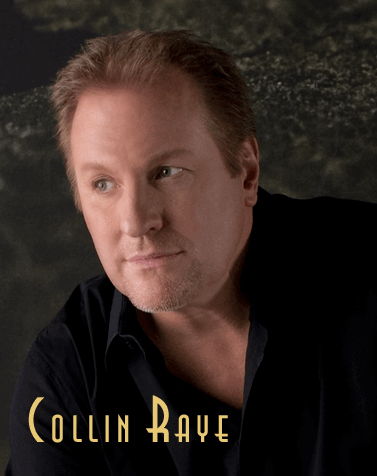 Born Floyd Elliot Wray on August 22, 1960 in De Queen, Arkansas, country artist Collin Raye was one of the true hit makers of the 1990’s. Collin still continues to crank out soulful, heartfelt material with the honesty and richness that is signature to his vocals alone. With 24 top ten records, 16 #1 hits, and having been a 10 time male vocalist of the year nominee (5 CMA and 5 ACM), this truly electrifying performer of his era remains one of the great voices of our time.

Collin Raye is nothing if not passionate. His soulful delivery has set country standards in such searing ballads as “Love, Me,” “In This Life,” “Not That Different” and “If I were you”. Always an energizing showman, he has also blazed through such vivid rockers as “My Kind of Girl,” “That’s My Story,” “I Can Still Feel You” and “I Want You Bad.”

​Collin shot to fame with “Love, Me” in 1991. Listeners were so moved by this golden and pure voice that this song set the cornerstone for a career built on meaningful and emotional songs that have often been used for weddings, anniversaries, memorial services and funerals. When “Little Rock”, an anthem for those struggling with addiction recovery, hit the chart in 1994, its video led to over 100,000 phone calls to Alcoholics Anonymous from folks seeking help in their addictions. “Not That Different” was a song that pleaded for tolerance. “In This Life” became a wedding favorite, and “I Think About You” won awards for its song and video which exposed the exploitation of women and children.